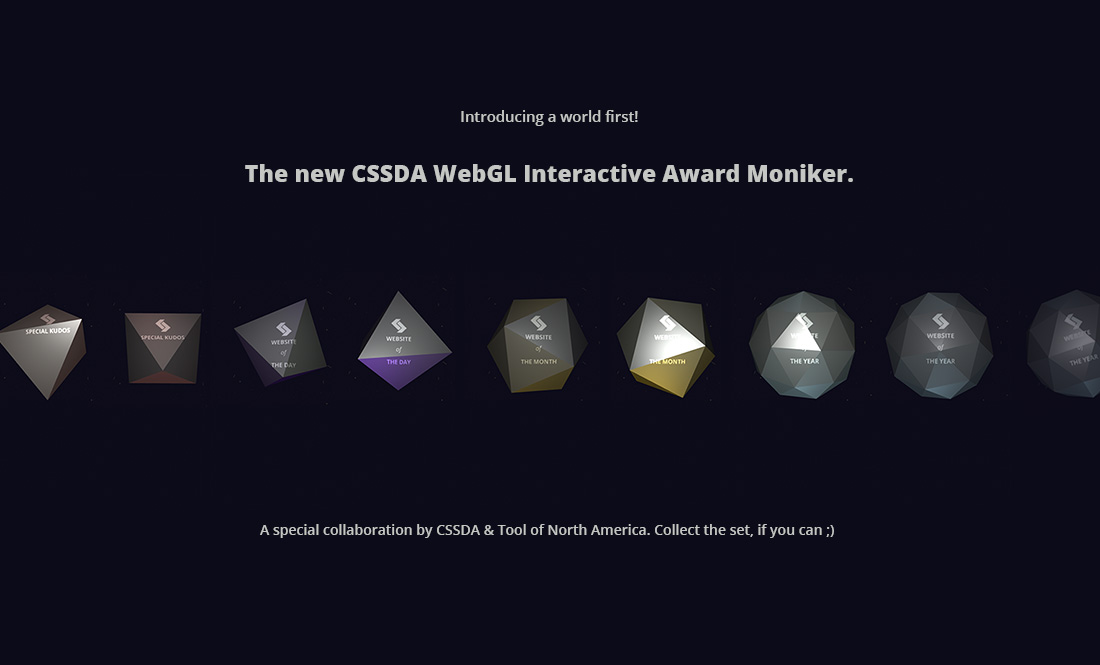 CSSDA and Tool are very proud to present the world's first interactive WebGL moniker for award winning sites. Conceived in Brisbane Australia and developed in California USA, the new WebGL moniker is the result of a successful international collaboration that sees the traditional 2D award badge superseded by an all new 3D code-based moniker.

"The new CSSDA Award Moniker is a reflection and reaction of this moment in time, a time when interactivity, 3D and VR are the hottest trends firing up the web."

Following on from highly successful collaborations in 2015 with Apt for CSSDA's official certificates and Aerolab for the world's first dedicated Website of the Year showcase site that set the trend in 2015, the CSSDA founders set their sights on a new world first - To design a paradigm shifting site award moniker that honors the full spectrum of people and technology involved in the digital experience.

With a reputation for being lovers of a challenge and led by innovation, Tool's impressive crew embraced the vision put forward and set about working their digital mojo. Backed by 20 years of award winning work for some of the world's largest brands, Tool turned their mastery of digital into yet another impressive mark in the history books by giving back to the web design community in the coolest possible way.

Led by Dustin Callif with lead development by Adam Baskin, Tool took on the complex challenge and delivered in typical Tool style. The task of developing a world-first code based moniker that encompasses UI, UX, design, development, and leadership into a single statement is every bit as challenging as it sounds. Not only was there a need for innovative and multi-layered thinking, the new moniker also needed to be lightweight and easy to implement on any winning site.

Early inspiration for the moniker was sought from metaphysics, crop circle designs, sacred geometry and anything with a multi-dimensional basis. This research plus a number of growing constraints led to the choice of geometric platonic solids, the foundation for all matter in the material world. Just like the platonic shapes of nature grow in complexity as the waveforms of energy underlying them rise in frequency and energy, so to the Moniker changes in shape complexity to represent each higher achievement.

Personality for the moniker was next on the list of items for the brief to Tool with inspiration coming from the sci-fi world and a character named "Bit", a 3D polygon dude created by Disney that featured in the original 1982 Tron movie. Adding a touch of personality was therefore an important "extra layer" that symbolizes the human factor.

"Although web awards are all about the work, it takes people to create the work, so really it's all about honoring the people."

Not only was Bit the perfect inspiration for an interactive moniker, he also helped the main character of the movie win "the game" which ties in nicely with the honor of winning an award, adding yet another layer to the stack.

With the brief in hand the highly experienced team at Tool then set about transforming the moniker into digital reality. The Tool crew had much to consider including the UI and UX aspects, how the award moniker would be displayed, code clashing possibilities, constraints such as file sizes and the ease of integration for the award recipients to add the moniker to their winning site/s.

"Tool left no stone unturned in ensuring that this paradigm shifting gift to the design community could be the best it could be and simple to implement."

To keep file sizes tiny and CPU performance unaffected, Tool steered away from the hyperactive motion of Bit and instead endowed the moniker with the perfect amount of poise and sophistication via a gentle rolling motion. The net effect of this teases the user into exploring the hypnotic accolade at which time they are rewarded with the high quality moniker at full size. Clicking the moniker then invokes a cool multi-dimensional effect to engage the user.

Thanks to the great collaborative spirit present in the design world the web industry now has a new mascot to help empower web designers and developers, and excite clients. The new CSSDA WebGL moniker is a paradigm shift from the old to the new that celebrates the innovation and dedication of so many in the pursuit of excellence.

The CSSDA founders sincerely thank Tool for working on our first collaboration for 2016 and for providing an accolade that is worthy of the people it rewards.

Tool is a multi-award winning collective of Artists, Directors, Designers, Producers, Technologists, Creative Dircteors, Dreamers, and Inventors that specialize in storytelling through film, interactive installations, virtual worlds and digital experiences. If Tool can think it, they can make it!