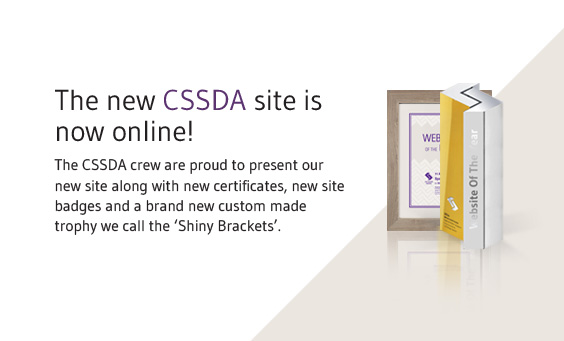 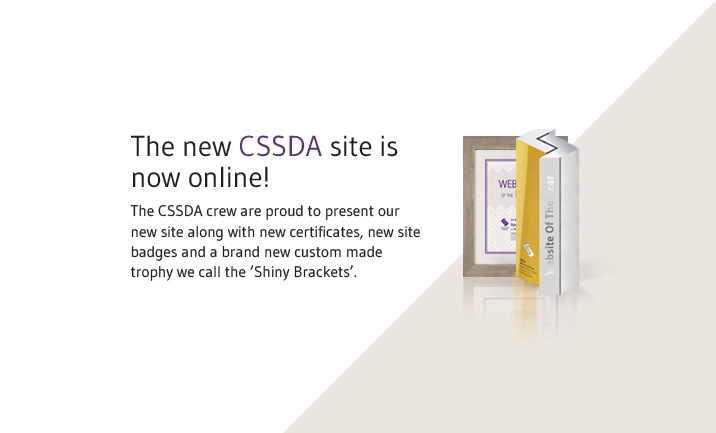 The new CSS Design Awards site is a complete redesign from the brand up that loses very little content during responsive degradation to mobile. SVGs and CSS have replaced everything except the main images which should see performance increases and greater aesthetic quality. The gallery now has more filters available to help you search for inspiration and the leaderboards are being overhauled to help keep up with all the action at the end of the year. Current nominees for the 2014 WOTY (Website Of The Year), DOTY (Designer Of The Year) and new DOTY S (Solo to Small Studio of up to 5 people) will be displayed on-site soon so get your sites in to be in the running to win. 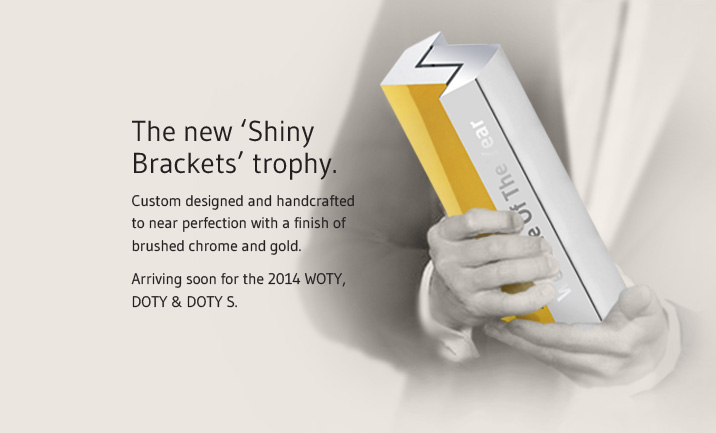 Winners of this year's 2014 WOTY, DOTY and new DOTY S will each be awarded the stunning new CSSDA award trophy affectionately titled the 'Shiny Brackets'. The Shiny Brackets trophy was proudly custom designed in-house with the goal of being the most prestigious accolade available in the web design industry today. Handcrafted and finished in brushed chrome and gold, the Shiny Brackets are a rare and timeless memento that celebrates outstanding achievements in web design and development. 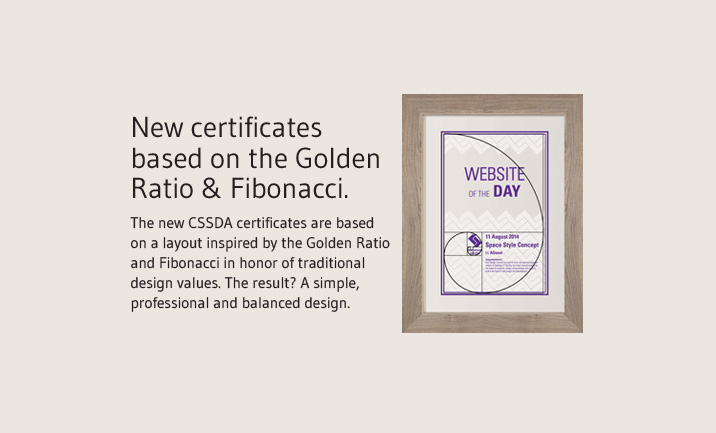 In honor of classic design traditions the new CSSDA certificates have been inspired by both the Golden Ratio and the Fibonacci curve. The result is a simple and balanced layout that has also been seamlessly designed to match the new look CSSDA site. As with the previous certificates the new certificates continue the trend of being color-coded to each of CSSDA's 4 main awards; WOTD, WOTM, WOTY & DOTY.

Recently a new award category was added to the CSSDA line-up titled DOTY S. This category is open to solo web designers and small-scale studios of up to five people and was created to help level the playing field for web designers that punch above their weight yet receive little praise in the shadows of larger creative teams. DOTY S winners also receive the new Shiny Brackets Trophy making participation a must-do for those considering submitting a site that may have been hesitant due to the high standard of sites received from much larger agencies.

Important changes To WOTY ~ A Better Way Is Coming.

Thank you to everyone that commented and gave points on the CSSDA site to date. Visitor comments and points are no longer part of the nomination process for the new up and coming WOTY 2014. This does not affect current nominees that have reached the required level of votes. We are determined to continue to evolve our internal systems to be the best they can be and will announce the new improved system shortly. The end of the year is not too far away so be sure to enter your best sites to be in the running to win.

Enjoy the new look CSSDA by starting at the home page.