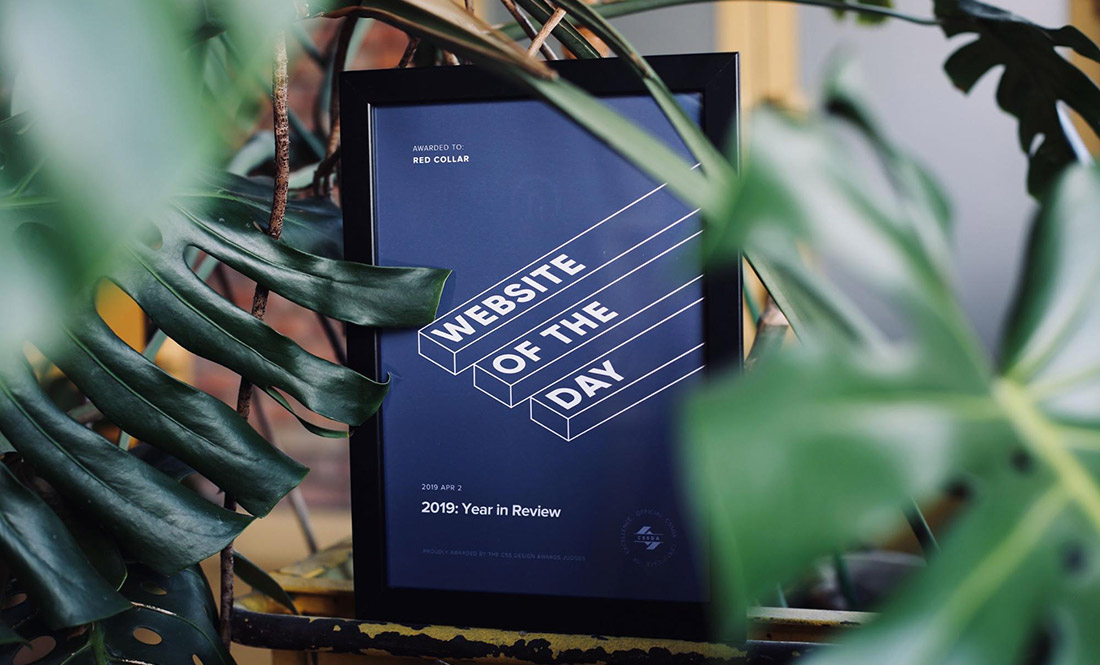 A brief introduction: who is Red Collar?

Red Collar is a digital agency based in Voronezh, Russia. We started out in 2011 and have scooped a whole cabinet of both Russia-based and international awards since then. At the top are Agency of the Year by CSS Design Awards and The Webby Award.

Today we are located in Voronezh and are opening a second office in the US. We develop websites, design corporate identities, upgrade the local digital scene, organize educational projects — basically, we're working on creating a strong community.

Currently the team consists of 30 girls and guys. It's an important stage when there's enough people to work on big and complex projects, but we can still gather all together, work on something creative or venture out for a barbecue. Largely thanks to this atmosphere we’re able to create hard-hitting projects. 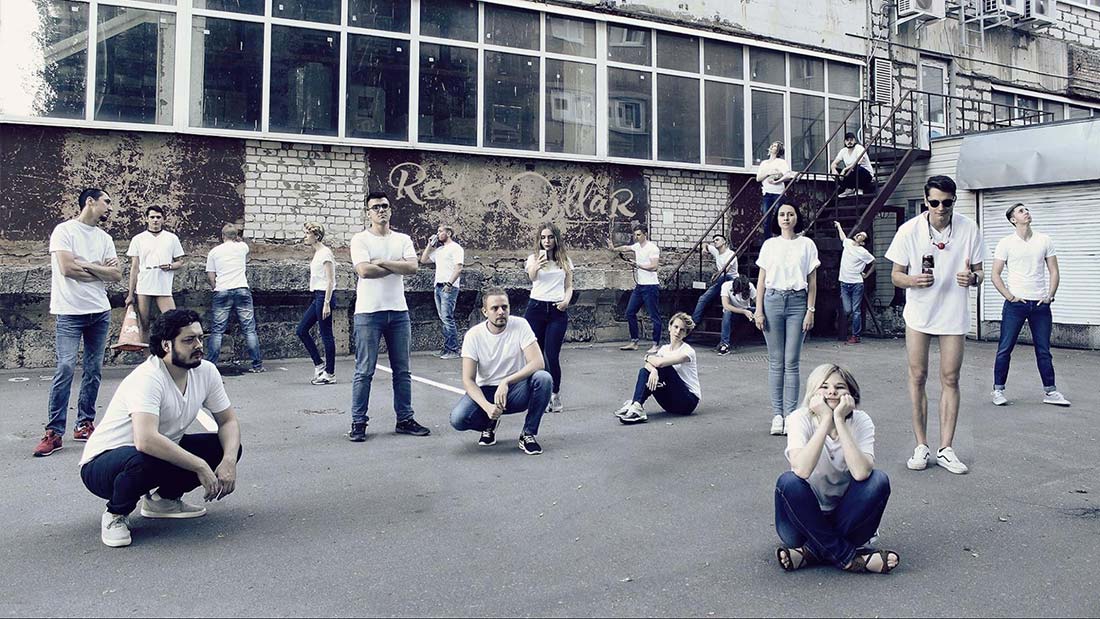 Ok, let's talk about the project. What was your reaction at the very beginning of the collaboration to design the all new CSSDA certificate range?

Total excitement!  Well, it is a highly responsible and demanding task, but for us the harder the better. Just imagine - CSSDA's audience comes from all over the world and the winners are the best of the best. The task was to create certificates that would become the symbol of flawless design, a reason to be proud for the most sophisticated people.

We make sure to share news about each interesting project so the whole team heard about the collaboration right away. We went over the details and discussed the first ideas then and there. In the course of work we were keeping in mind all those agencies and studios from all over the world honing their skills in design and web development, submitting their work to platforms like CSSDA and winning awards.

We were also mindful of the judges who evaluate the projects and those who visit the platform daily to get inspired by a new solution. This helped us to move forward from secondary ideas and keep only the best ones. 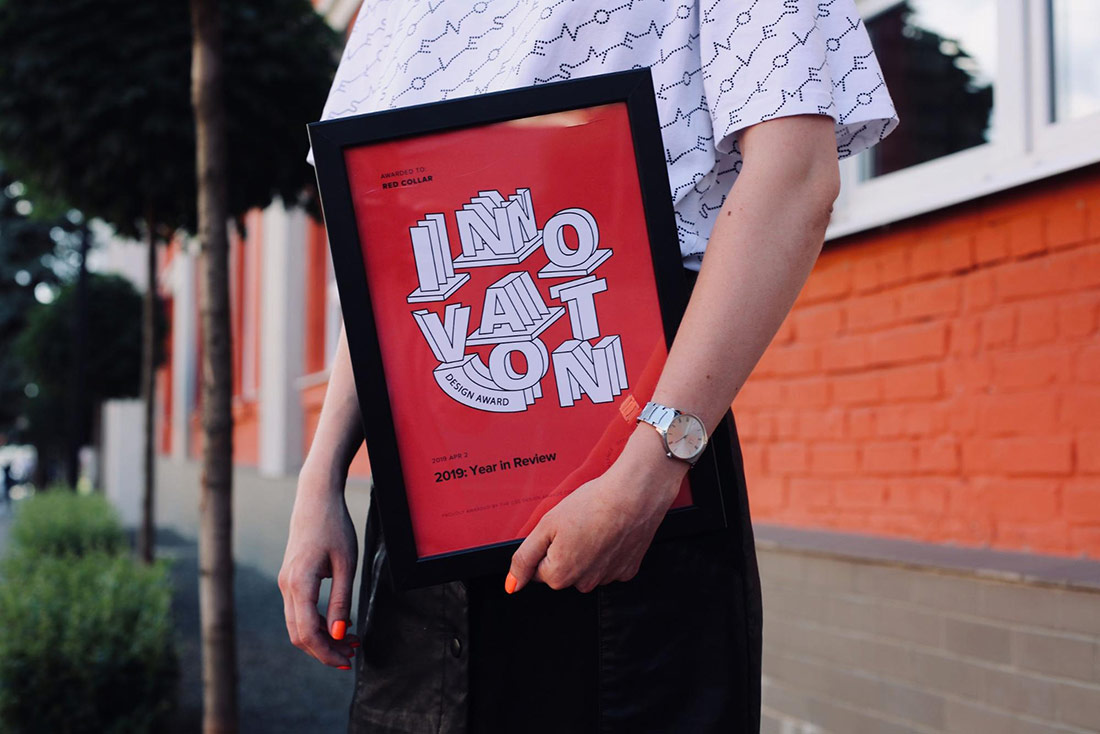 What does CSSDA mean to you? Was there something you wanted to convey through this project?

CSSDA is a huge international platform for designers and web developers that showcases and awards those who push the boundaries of UI, UX and Innovative development.

For us personally it was important to communicate the versatility of the digital scene, the fact that every project has dimensions and many aspects, every one of which should be right on the money - only then it will turn out worthwhile and will push the industry forward.

Needless to say, the certificates had to be stylish and visually pleasing, so much so that you’d want to put them on your wall and admire them, get inspired for the new achievements, take pictures of them to share in social media, show them to clients and wish to get more and more of them.

At first you were working on the "Public Awards" certificates UI, UX and INN. How did your design concepts occur to you? Were there any difficulties?

Let's recall that the "Public Awards" are a particular set of certificates: they are awarded based on the votes of the community after a site has received a high enough score from the judges. People, dozens of thousand of them, decide if the interface and the experience is good and whether it is overall innovative.

These certificates needed to differ from those awarded based on the judging panel's final score. They needed to have more emotions and dynamics, to differ from each other while at the same time conform to their own specific style.

Looking for ideas, we started with pretty simple things: finding a metaphor for each award, picking a bright image for each of the three certificates. For instance, the UX certificate might have had an image of a palette and the Innovation one might have had laboratory test tubes or flasks. We dropped these ideas because excessive objects complicated the composition and created visual clutter.

Typography was taken as a basis: it is a timeless classic. We created outlined letters in pseudo 3D, filled them with white and put them on a bright background. They reflect the plurality of voices of the community members through multiple layers of the objects. There are different bright backgrounds, but overall it feels like a unified pack. 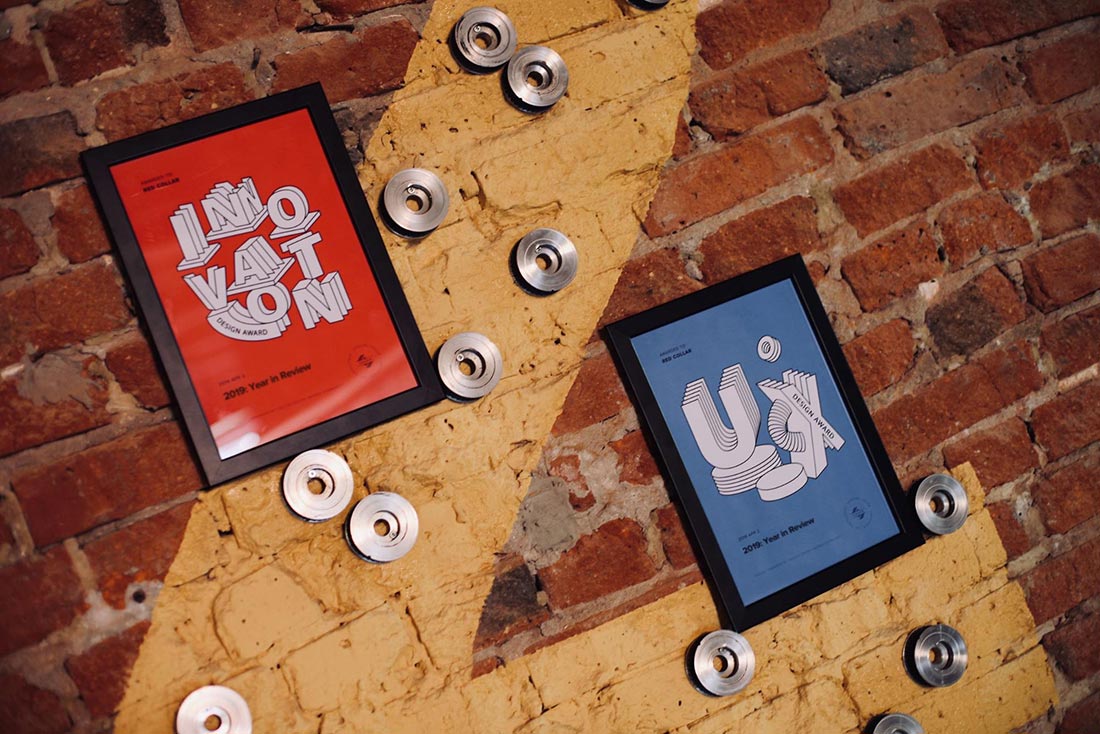 Judging panel certificates differ from the Public Awards above. Can you share insights about them as well?

The key task here was to convey the previous designs because they have become distinctive, yet we needed to remake them in a modern way and to marry them with the new Public Award certificates given by the community. Besides, Special Kudos, Website of the Day, Website of the Month, Website of the Year and Designer of the Year are awarded by the judges and often strived for over many years. They had to look strict, stylish and worthy of all of the hard work invested in the winning project.

We transferred the distinctive diagonal lines from the previous designs by creating them in 3D, like the details on the Public Awards certificates, and placed them at an angle. The background colors are quieter than the Public Awards and we wanted the rest to follow this concept.

In fact, there was quite some work with colors. Given that the certificates are to be printed out, we had to work in the CMYK color scheme. Absolute bright colors would not be as bright as they are seen on a screen. So we needed to pick the tones that would look good both on screen and framed on a wall. To our liking, deep pastel colors were an ideal choice.

Now the work is done, what is your impression of the project?

It was quite a challenge to create something for the best designers and developers worldwide. The communication process itself with the CSSDA team - all the discussions of the variants and working on the coherent picture that would get the platform atmosphere across — that was cool! A genuine collaboration.

We are looking forward to the day when we'll get a certificate with our design for one of our projects - it will be a curious feeling.

How do you come up with ideas for your projects? Is there a set process for this? Who or what inspires you?

The question about inspiration is one of the most frequent in design related interviews and it is interesting to see your own replies over time. If you had asked us this question two years ago, we'd list several particular top-of-the-line studios. Now we already deal with those studios on an equal basis, some even get inspired by our work as well. This is incredible, and provides motivation for future achievements.

Currently we follow less of any particular studios and more of international award platforms, and track great projects and ideas at CSSDA as well.

Inspiration can be found anywhere: in movies, music and music videos, fashion, inventions, new gadgets. For this purpose we have a design chat where every designer can share something they deem interesting, so that we can discuss the ideas and inspire each other. And later on during a brainstorming session for a new project somebody says: "Remember the video Michael shared in the chat? There was that great idea..." That is how cool shticks are born. 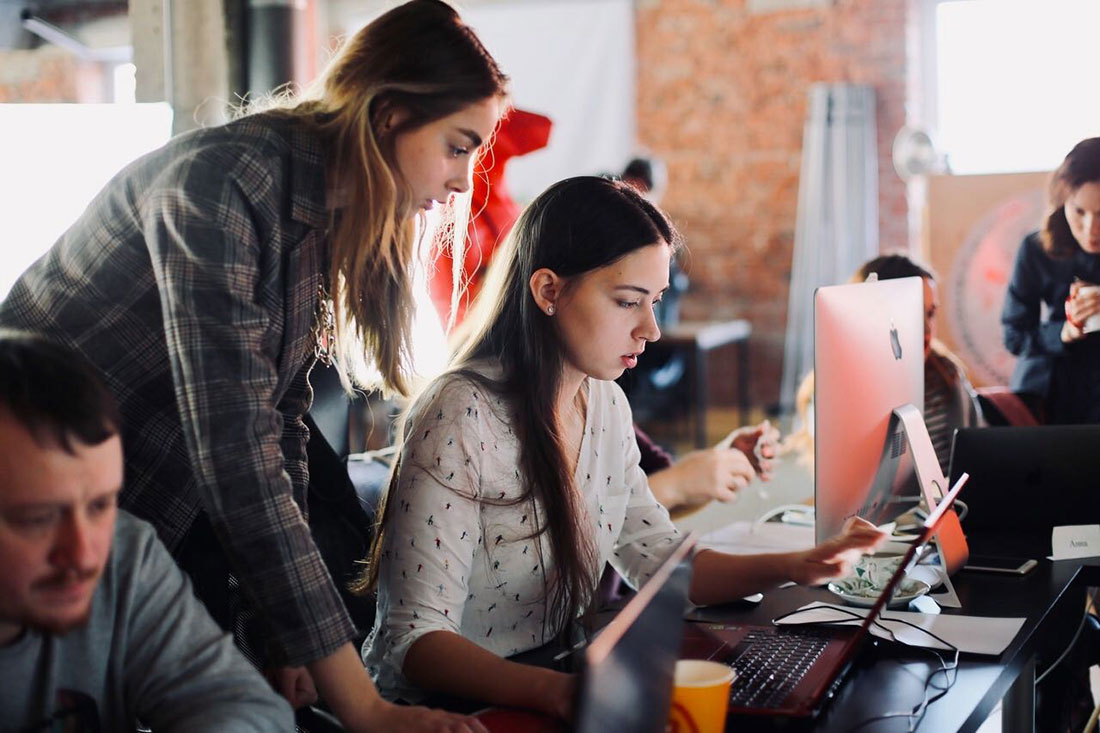 Where is Red Collar headed now? Is there an overall goal?

We are growing pretty fast, getting more and more projects, so we need the team to be big. In the course of 2018 the team grew twice as big as it was. This year we recruit employees and interns as well.

One of the main tasks is to keep the Red Collar spirit. We don't want to turn into a big assembly line making impersonal identical projects where people from different departments don't even know each other. In ten years we'd like to collaborate with the giant brands for the most crazy projects, but still be an open, friendly and creative team.

Goals are reached one way or another and we have to move forward. Once we dreamed of winning a Website of the Day by CSSDA, now we've been an Agency of the Year - which is super cool, but it's important not to stop and to keep working to be better and better. 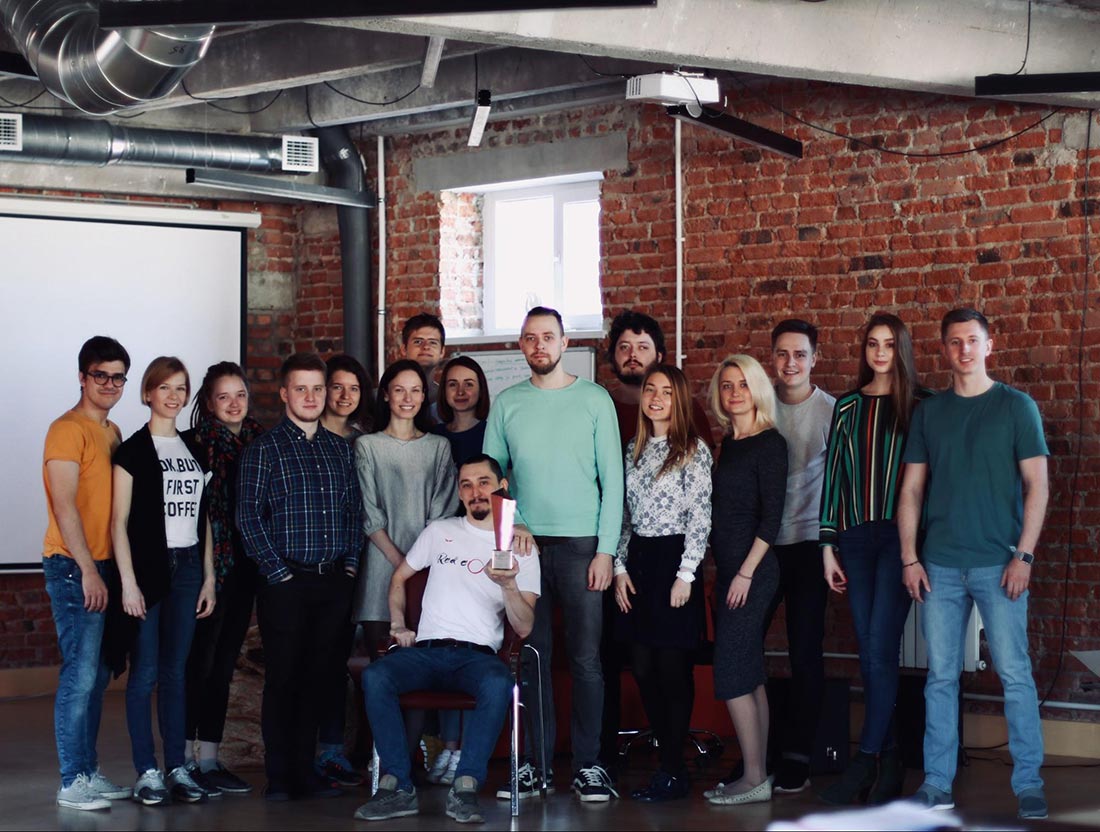 On behalf of the CSSDA team, judges and community, we thank Red Collar for a wonderful outcome and for sharing the process behind the collaboration.