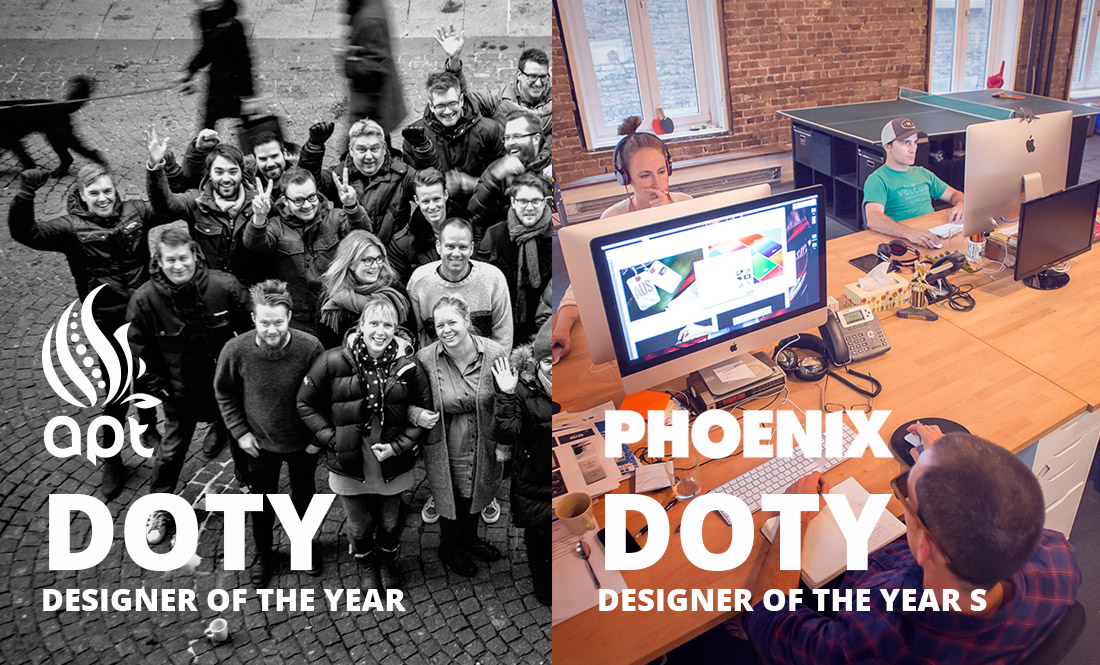 Choosing this year's Designer of the Year / S was particularly challenging thanks to a leaderboard full of distinguished champions.

To help us make this difficult decision we turned to every method at our disposal from on-site traffic stats, applause, social media activity, buzz, creativity, uniqueness of style, variation in designs throughout the year, and what innovations each of the finalists brought to the industry. We considered color schemes, semiotics, usability, and more. To coin a phrase, no stone was left unturned.

Apt is a digital agency based in Oslo Norway that was established in 1999 and has since become recognised as one of the top digital agencies in the world. Apt's work is like that of a master craftsman with each experience meticulously executed and polished to perfection. Evident in each piece is a symbiotic relationship between Apt's own uber-functional style and the style requirements of their client's target audience. Their work exudes a youthful freshness as though each project was their first, a precious trait to have in a world requiring simpler, easy to digest feats of digital communication. Congratulations Apt!

See the interview with Apt » 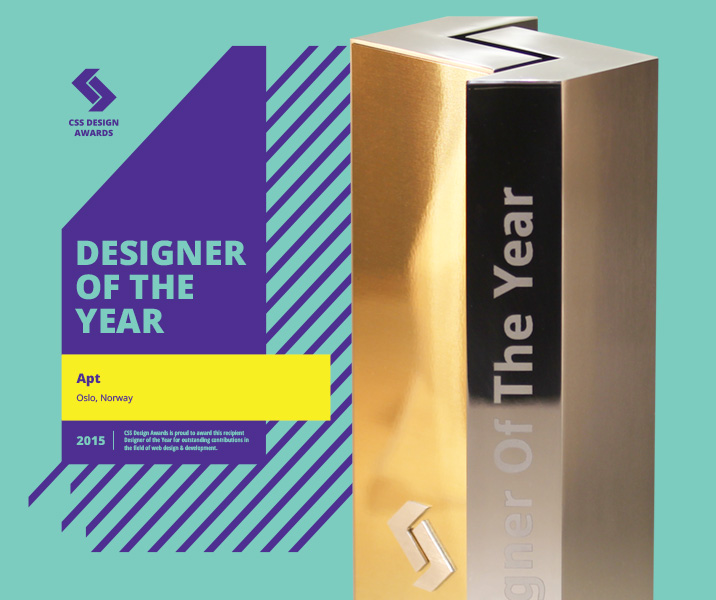 Designer of the Year 2015 finalists:

As a thank you to the finalists for their amazing work we are proud to commemorate each achiever with certification of their DOTY 2015 finalist status. Agencies/studios that achieved top placement on the DOTY leaderboard will receive finalist certification. In alphabetical order.

DOTY S was the first award introduced to the industry that was designed to create a level playing field for solo designers and small studios that were previously up against global agencies with impressive resources and higher budgets. We're proud of this fact but believe we can still go one better. This year we are very happy to award the Shiny Brackets trophy to the DOTY S winner while at the same time introduce new categories for solo designers and developers.

Recipients of the new solo category awards receive certification, peer respect, global exposure, permanent career notation, and all of the other long-term benefits deserving of their achievements.

Phoenix The Creative Studio wins Designer of the Year S!

Phoenix the Creative Studio is a marketing agency based in Montreal, Canada. They specialize in branding, interactive solutions and visual communication in all its forms. Their work attracts international acclaim for innovation, attention to detail and they possess a powerful command of aesthetic creativity, the equal of which is usually seen in much larger agencies. Of particular note is the wonderful variation in their projects with high levels of sophistication that make every site a joy to experience.

See the interview with Phoenix the Creative Studio » 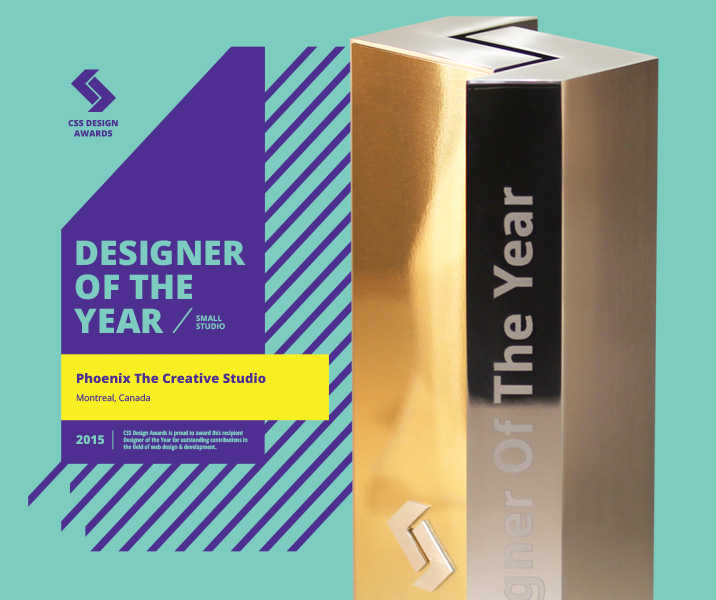 Designer of the Year S 2015 finalists:

The Best Client award is a special commendation for clients that have the courage to follow the creative path set down by their chosen design team. It commemorates and recognizes the strength inherent in digital design in the 21st century and rewards clients and their creative teams for investing in innovation and web technologies.

Peugeot in conjunction with dpdk have delivered exceptional and inspiring examples of what can be achieved when great clients and leading creatives get together. Of particular note is their multi-award winning work with the Catch The Dragon campaign, Follow your Intuition and Peugeot GTi - Chase the Line, each a bold statement of the possibilities and success that can come from digital innovation. 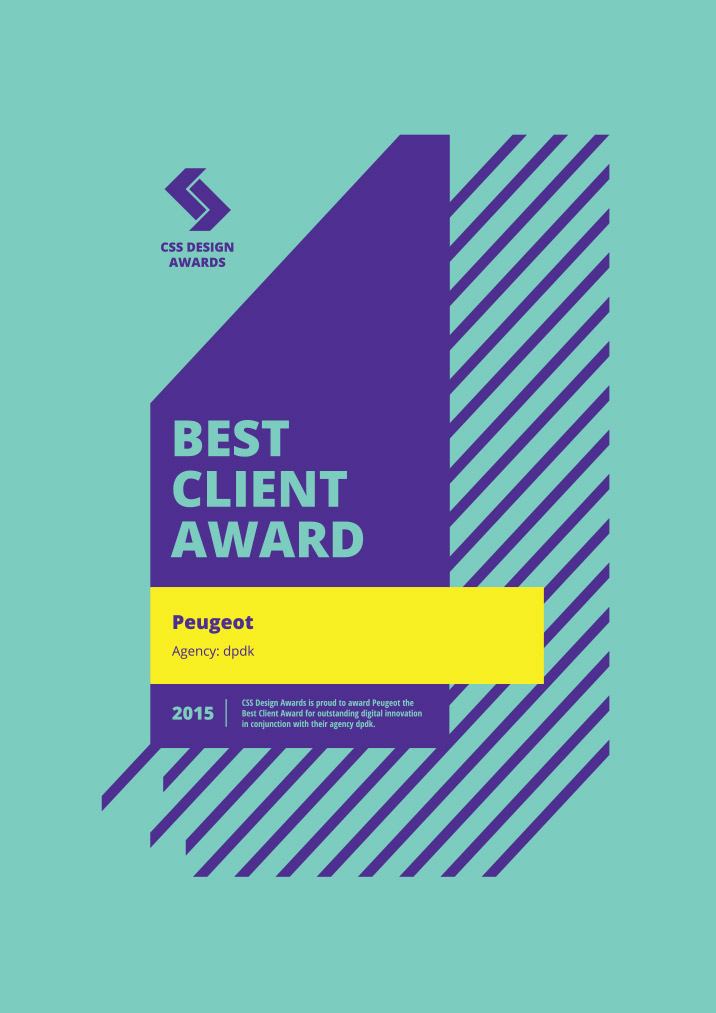 The Best Emerging Designer award has been introduced for the first time this year to showcase the creative leaders of tomorrow. It's our way of reaching across time to try and uncover future design heroes that demand attention through the work they are producing today. This category is open to both agencies and solo professionals.

Adoratorio is an award winning creative collective of designers that develop visionary communication projects. Self proclaimed dreamers, they are a young agency that were founded in 2014 and have already carved out an impressive and original style that imbues their highly creative and professional work with a kind of 'elegant edgy-ness'. An exciting agency to watch in 2016! 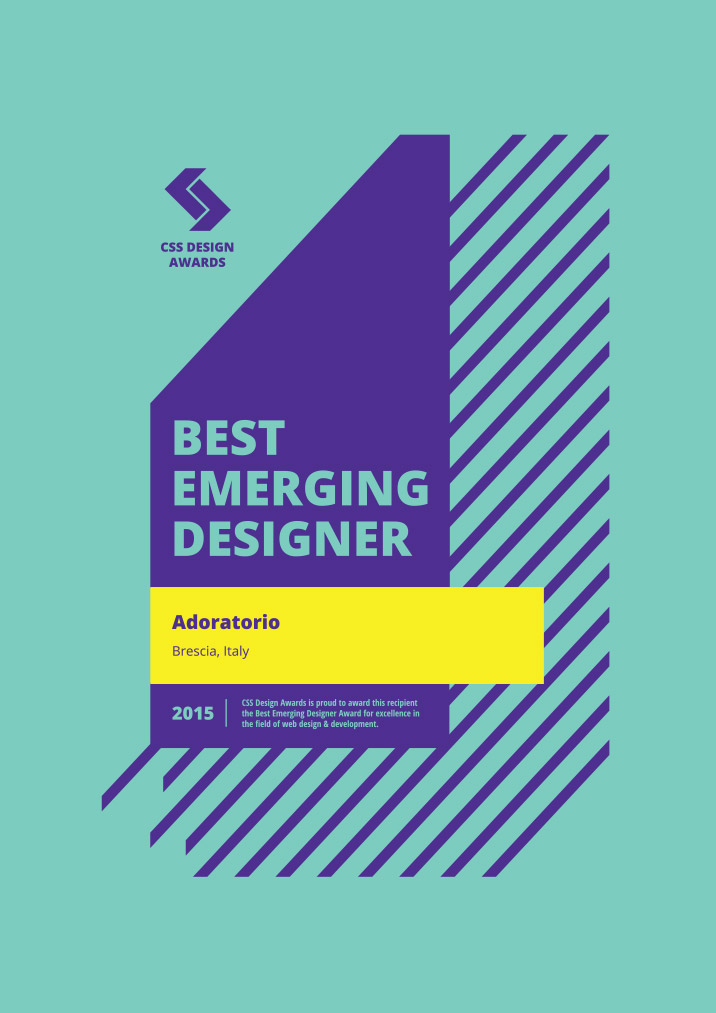 As part of our commitment to provide a level playing field for both large agencies and individuals, a new range of solo awards have been introduced to reward creatives that excel thanks to the sheer power of their work and an unyielding commitment to perfection. Please keep the applause going for the following well deserving recipients of the new CSSDA Solo Awards for individual designers and developers.

In every industry there exists a handful of rare individuals that excel in multiple disciplines and the web design / dev industry is no exception. The new Digital Craftsman Award is open to men and women that could best be described as 'digital renaissance masters', people that effortlessly produce what many others only dream of producing. We are very proud to recognize these shining lights and thank them for their hard-earned 'natural' ability to excel. Congratulations Bryan James for winning the very first Digital Craftsman Award! 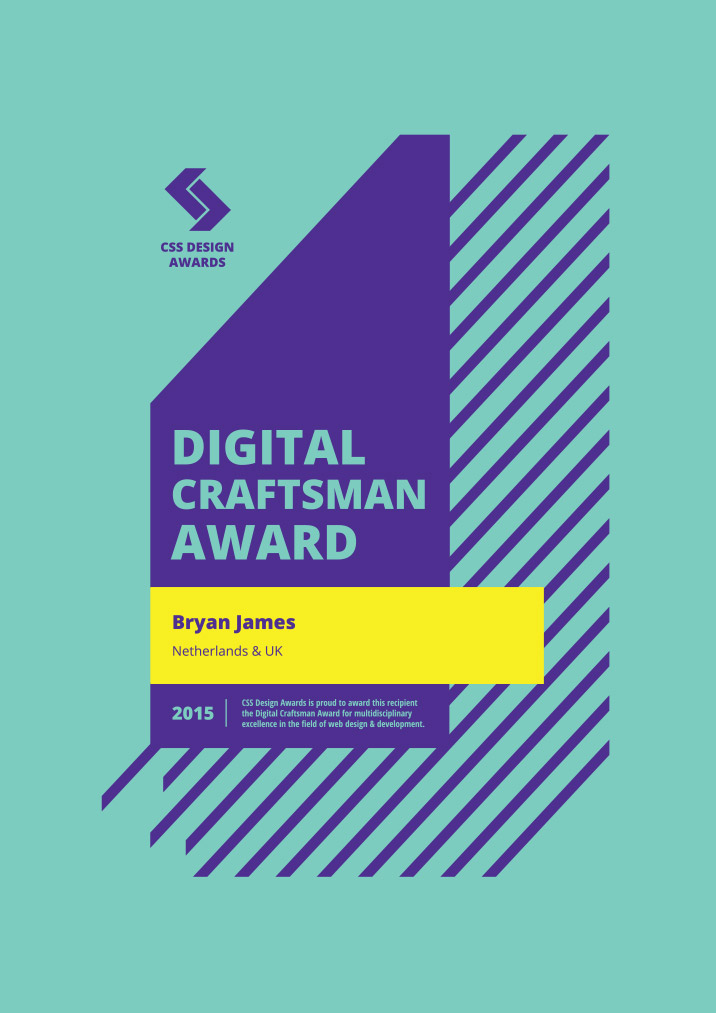 Separate recognition for visual designers in the web industry is long overdue. Great branding, content and code would never be seen if not for great visual design. The visual designer deals with a vast array of possibilities, constraints and external factors which means they also need to be part psychologist, salesperson, dream interpreter and of course, master of multiple visual mediums. Thank you to all of the visual designers for providing the exceptional visuals necessary to make our world turn. Congratulations Thierry Ambraisse! 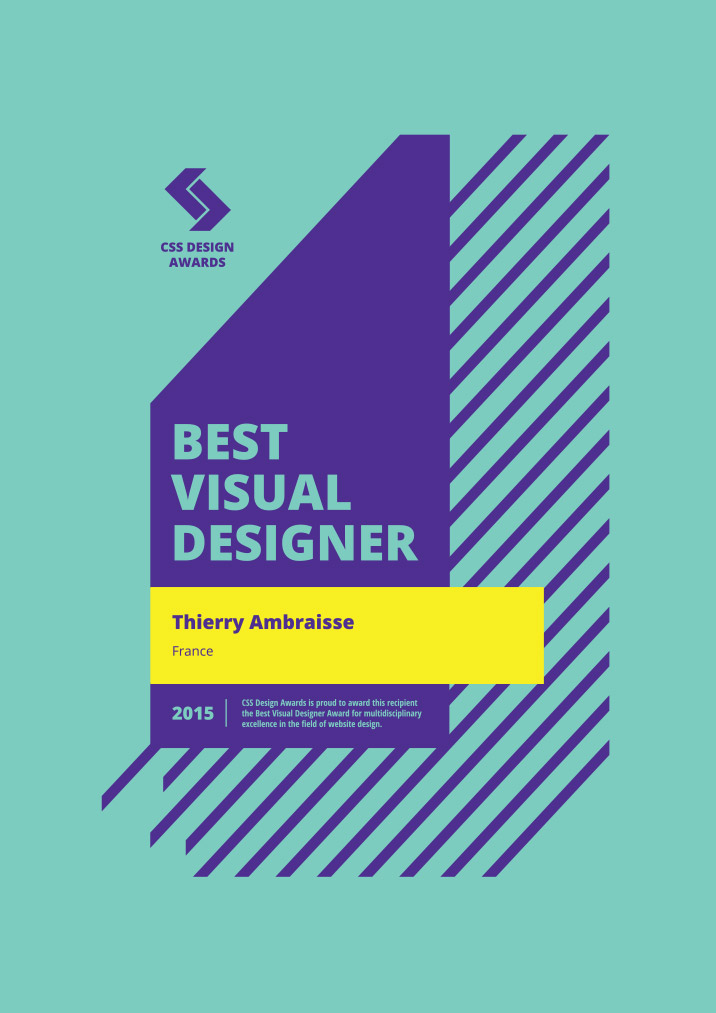 The important role of the front end developer can not be overstated. With a seemingly infinite capacity to absorb new information and amazing levels of patience in dealing with the 'Ground Hog Day' cycle of constantly learning new tech (and dealing with all the bugs that come with), the front end developer is a linchpin in the digital world. Simply put, without these essential people nothing would run. Game over.

The new CSSDA Best Front End Developer Award honors the individual developer that forever walks the line between wearing the hat of a reality-to-digital interpreter and the cape of a modern day superhero. We salute their tenacity and inspiring work ethic and wish to thank them for bringing the mean average brain usage rate up for the rest of us ;) Congratulations Antoine Wodniack! 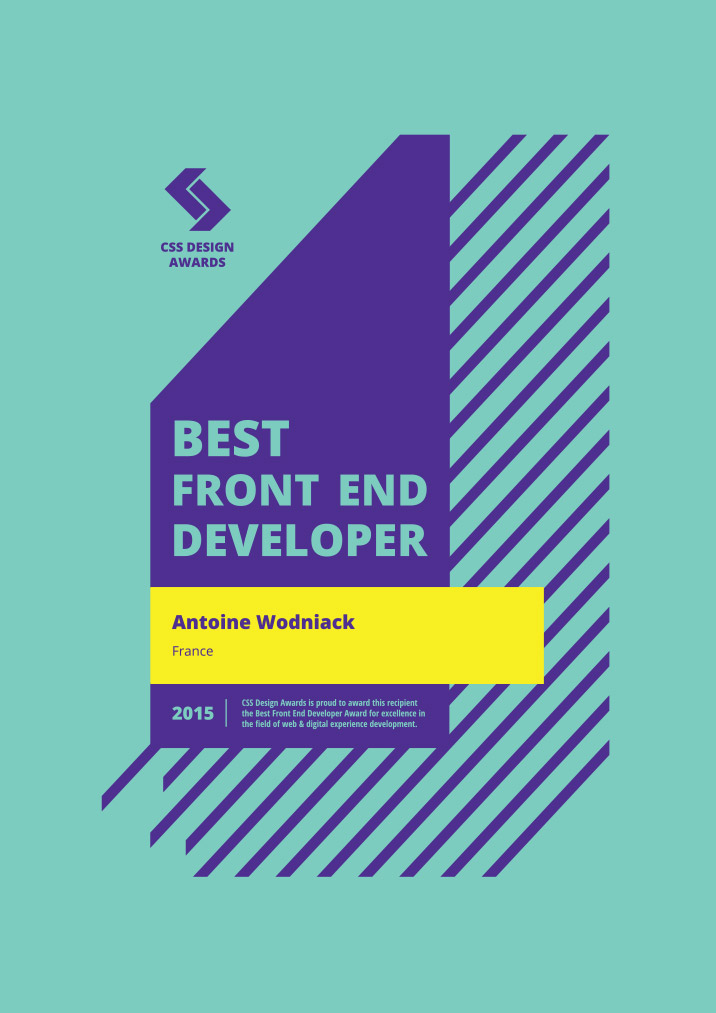 Another essential role in today's pixelated reality is the user interface designer. UI designers spend their days asking and answering the core question - what does the user want? Once the answer has been found, the UI designer takes all of the information gleaned and then tries to make it as invisible as possble so the user can get on with what they are there to do in the first place. As such, UI designers require admirable levels of discipline while maintaining an intuitive disposition. A tough role but very rewarding when done well! Congratulations Piotr Swierkowski for meeting the challenge in 2015! 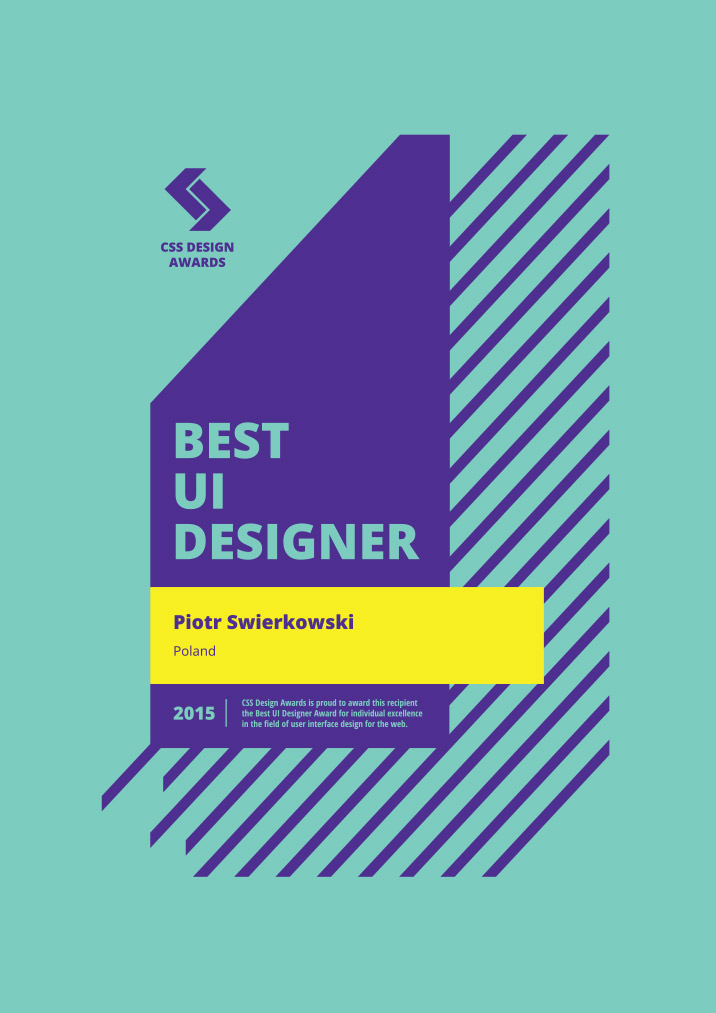 User experience design has become one of the hottest elements in web design today. So much so that we decided to introduce the first dedicated UX Designer award to help inspire even more focus on one of the most under-utilized weapons of mass satisfaction. Building an interface is one thing, but knowing what the user will actually experience while using the interface is a whole new paradigm. It's here where the UX designer shines and helps make the world a better place. Congratulations Admir Hadzic! 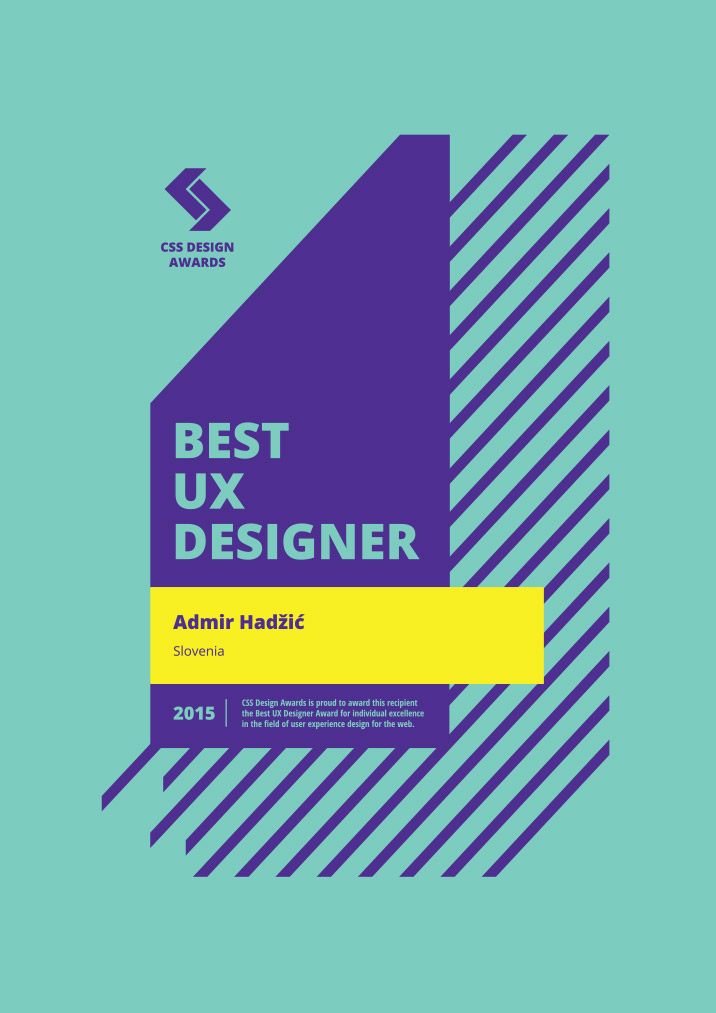 The Best Breakthrough Designer Award is aimed at recognizing creative leaders that breakthrough the ranks of notoriety quickly thanks to innovation, determination and an ever growing body of impressive work and experiences. Best described as Alpha designers, the breakthrough designer stands still for no one and they inspire others in their wake. Our hat goes off to you, the breakthrough designers of the world, for bringing your own unique touch of chilli to the great recipe of design. Congratulations Alexander Engzell for spicing up 2015! 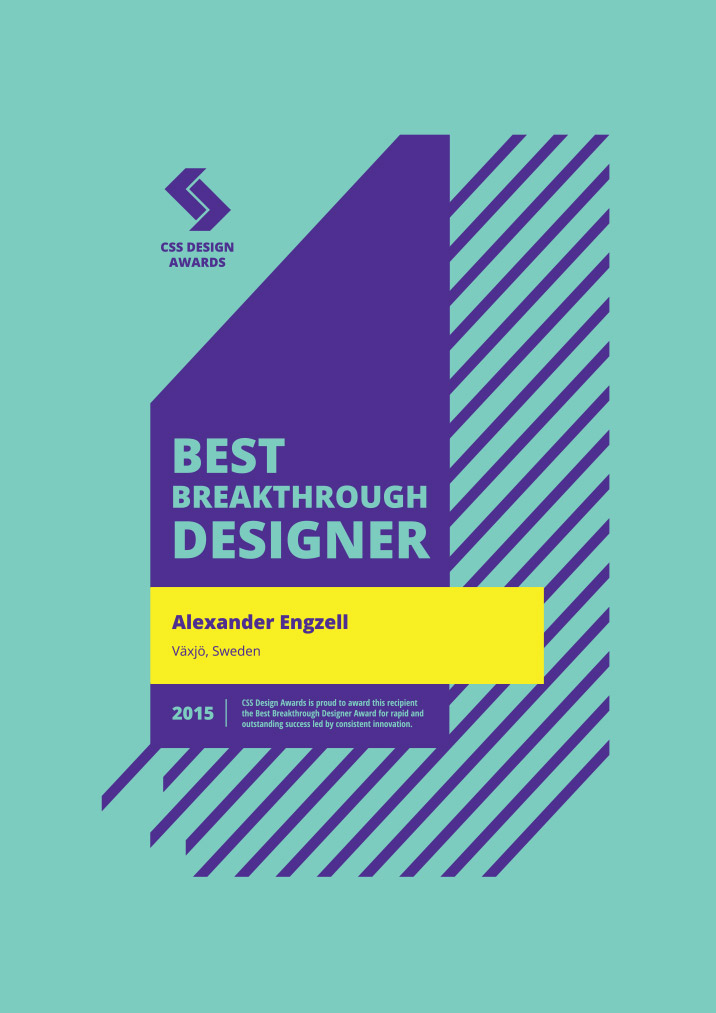 Where would the digital world be without experimentalists? This year we thought it fitting to introduce a unique commendation that shines a light on the people that spend countless hours perfecting the little things that drive big innovation in the web design and dev industry. Welcome to the CSSDA Best Code Wranglers list of 2015! A special accolade for code-loving experimentalists.

Nominees for the BCWA were sourced from our feature web developers edition of Design Stories #7 back in May and from sites like Codepen, the world's best front end developer's playground. Congratulations to each recipient and keep up the great work!

The world is full of talent and inspiring design comes from all corners. What better way to celebrate this talent than by recognizing the best designers from each country? Therefore, without further ado, please put your digital hands together one more time for the new Best In Country recipients from countries that saw more than two Website of the Day awards in 2015. Winners have been chosen based on the most awards won.

That wraps up the 2015 Designer of the Year!

Our heartfelt congratulations go out to all of the recipients and we sincerely thank all the designers, developers, creative folk, enthusiasts and followers for your support through a monster of a year. Here's to 2016! Thank you everyone!

2015 WOTD WINNERS: If you won WOTD in 2015 you may be eligible to receive an official notice of nomination for DOTY! Contact us for more info.